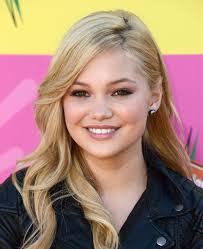 Olivia Hastings Holt (born August 5, 1997) is an American actress, and singer best known for her playing the role of Kim on the Disney XD series Kickin' It and starring in the Disney Original Movie Girl vs. Monster.

Retrieved from "https://shake-it-up-fanon.fandom.com/wiki/Olivia_Holt?oldid=18740"
Community content is available under CC-BY-SA unless otherwise noted.