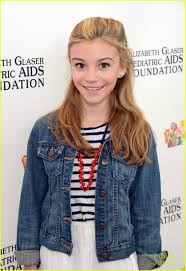 Genevieve Hannelius (born December 22, 1998) known professionally as G. Hannelius, is an American actress and singer. She currently stars as Avery Jennings in the Disney Channel sitcom Dog With A Blog. Prior to this she had recurring roles in the Disney Channel series Sonny With A Chance and Good Luck Charlie. She has also done voice work as Rosebud in the Air Buddies films.

Retrieved from "https://shake-it-up-fanon.fandom.com/wiki/G._Hannelius?oldid=20415"
Community content is available under CC-BY-SA unless otherwise noted.